Just back from a trip to Anacapri and Sicily. What an adventure- beautiful hotels, Air B&B’s, trains, ferries (including an overnight ferry), car rental and a flight….

Of course everyone wants to know WHAT DID YOU SHOP FOR? 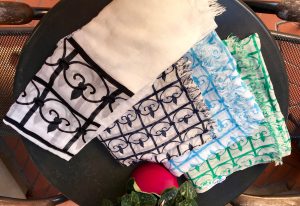 Found these scarves in a little shop in Anacapri. The pattern is the gates of Capri and as you can see, I bought several! They also had large canvas tote bags in this pattern and all sorts of little bags. Wish I had gotten some of those too! Bought a linen shirt in a fabulous shade of jade green, a cream cashmere poncho and scents from a very old profumeria called Carthusia. I am not usually a fan of room scents, but the Mediterraneo per casa changed my mind.

The overnight ferry from Naples to Catania, Sicily was interesting. Great little cabins and Chia was permitted also. Once in Sicily, I bought table and kitchen linens of beautiful quality. I even found pink linens for my table in Seattle! 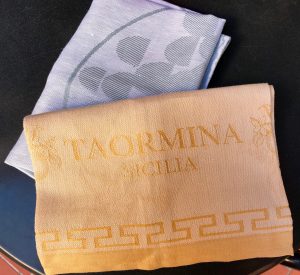 Taormina was my favorite and we had drinks at Wunderbar where Liz Taylor and Richard Burton used to hang out. Had to try the cocktail that Liz always ordered, and it was yummy! 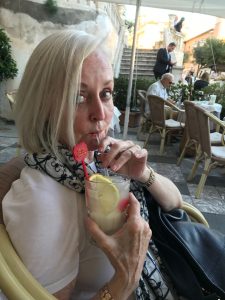